New month,new draftcap. While Imprisoned Herald came out a few weeks ago, I held off on doing a draftcap cause I figured I’d rather learn something about the format first. Anyway, let’s get to it.

Pack 1: Borean Windreaver is a perfectly fine vanilla creature, and its ability is very powerful. Frostang Maiden is okay. Onxyium Phantasm is clunky to begin with, the Allied ability is fairly relevant and the format is fast enough now that the utility strikes me as fairly small. War Merchant is solid. Sytgian Lotus is a good start to A/U Upgrade, which I’m not a fan of. Nexus Gunner is comparable to War Merchant, and I think Gunner is slightly better. I take Windreaver as it’s the best card by a good margin.

Pack 3: Stouthide Stegadon is fine, sometimes you get to eat something for free. Anatomie and that whole cycle can be good but getting the critical mass of them for a payoff is really hard. Organ Harvester is a good answer to threats. Ice torrent is unplayable. I go for Organ Harvester, let’s see if i can’t make N/T Ambush happen.

Pack 4:  Seal of Kadras doesn’t do anything for two levels and I’m not in Alloyin so I can’t cheat the first two levels. Crag Walker is a good aggressive card and it’s low health isn’t that much of a drawback. Xithian Crusher is the closest thing to Stonefist Giant we have in draft at the moment, just less risk/reward tied to it. I take Crag Walker, I think it does more with less investment required. 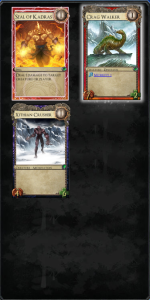 Pack 5;  Perdition Guard is a big level 2 and bad other levels and ruthless wanderer needs a critical mas. I take Guard, I don’t want the Wanderer influencing real picks and cards like Guard have a purpose.

Pack 6: Catacomb Spider is a win-more card at best. Razzortooth Stalker needs to get one hit in and it becomes a threat. Ashuarian Flamesculptor is notable for being Consistent with some random upside at times. Seal of Kadras is still bad. Spiritfrost Shaman is solid vanilla creature that can give reach at times. Nargath Warrior is just unexciting. i take Stalker.

Pack 7: Staggershock is much like Anatomize but a lot more upside to it by virtue of just killing stuff. Xithain Rotfiend is a good underdrop/threat. Uranti Elementalist is a nice trick on a body. Nyrali Ambusher is fine. Firemane Steed has gone up for me, he’s annoying and then he gets huge. I take Rotfiend.

Pack 8: Nyrali Symbiote is good with pump or just in fighting creatures that fail the vanilla test. Spider and Seal are still bad. Ambusher is a good underdrop. Ambusher is the pick.

Pack 9: Misery Demon is not what I had in mind when I said N/T Ambush, the small body doesn’t make up for the life drain. Thundergale Invoker is gimmicky. Portal Shade is fine on the vanilla test and it can generate additional value? Done, pick it easy.

Pack 10: Xithian Host is bad, I don’t have anything that cares about Abominations to justify it. Shaman is solid and an easy pick.

Pack 111: I would be rather happy with a second Stalker. Violent outburst seems terrible outside of a way to get in those last few points of damage. Staggershock is the same as before. Uranit Icemage isn’t consistent enough in draft to pay off. Cinder Mystic is the same as before. Ashuarian Brawler is a good underdrop/aggressive card. I take Stalker, I feel like my underdrops are shored up enough that I can afford to not Brawler at the moment.

Pack 12: Wallbreaker yeti is good at 1 and 2 on its own but the level 3 really wants to hit a Defender. Talin Stampede doesn’t do much. Elementalist is the same. Firelit Hunter is what I had in mind when I said N/T Ambush. Grave Geist is as solid as always. I take Hunter for more potential upside.

Pack 13: Conflagrate is pure value and I don’t have any spells yet. Steed is fine but I want ways to interact with my opponent outside of playing creatures. Gloomspire Wurm is bad as is Seal.

Pack 14: I don’t want a second Guard so it’s either Glacial Crush or Tremorcharge. Half of my creatures at the moment are Tempys so I opt for Temorcharge.

Pack 16: Group Meal impacts multiple lanes and mucks up combat math in my favor. Runestorm Primoridal is the worst Consistent creature by a good margin. Second Manticore is fairly tempting. Uranti Warstoker doesn’t do anything when it’s the only Yeti and doesn’t do much in general. Ice Torrent is bad and Tarsian Pact doesn’t do much. Group Meal is my pick.

Pack 17: Calamity Fiend makes up for his less than stellar body by messing up someone else’s. Cloudcleaver Titan is comparable to Stalker. I don’t want a 2nd Harvester. Zombie Titan is solid. I still don’t want Warstoker. I take Fiend.

Pack 18: i’m not the biggest fan of Death Current. Wallbreaker is a good as a sideboard card against Defenders. I don’t want a 2nd Steed. Ossuary Spirit gets massive at level 3 but there are other things I want to be doing. I take Yeti.

Pack 19: Yeti Warcaller and Ghastly Renewal don’t do anything. Fell Strider is a legit good card and easy pick.

Pack 21: Renewal still doesn’t do enough.  I wouldn’t object to a 2nd Ambusher. Nyrali Ooze is fine, it blocks twice. Tarsian pact is not what this deck wants. Legion Titan can be good but you’re probably winning those games already. Ebonbound Warlord is very strong and I rarely pass any of the -bound cards, so easy pick here.

Pack 22: Dirge Banshee comboes with Windreaver but with only one way to move it I’m not the most excited about it. Borean Stormweaver is good, he gets massive and has a relevant ability. Kadras Colossus is forgettable. Instigator is an aggressive body. I take Stormweaver.

Pack 23: Cinderbound Barbarian gets the pick. Chant of Dragonwatch can be good but not as good as Barbarian.

Pack 24: I like Infernal Visage when I have other creatures that care about being in the side lanes already. Grave Geist is a good addition to the deck. 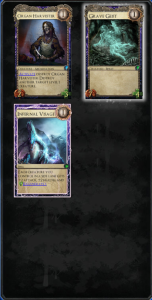 Pack 26: Spiritleash is hard to get value out of in this deck. Umbruk Lasher doesn’t need it’s Allied trigger to be good and is a fine addition to the deck.

Pack 27: Duskspire Zombie isn’t what this deck wants at all. Seal of Tarsus and Spiritcleave are pretty close and I go for Seal since it’s more flexible. 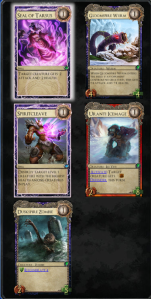 Pack 28: I like Embrace more than Chant because I don’t want the games to go long enough where Chant shines.

Pack 29: Spiritcleave does more than give me another means of marginal reach like Sparkbrand Asir does.

Round 1 was against a nekirum/uterra deck  who had answers for my Stalkers. i put up a good fight but scooped at the beginning of PL4. 0-1

Round 2 was against an Alloyin/Tempys deck that was able to level Iron Maiden and i couldn’t kill them fast enough. Game ened at hte end of pL 3. 0-2

Round 3 was against an Uterra/Alloyin deck that could never catch up to me. Game ended in PL3. 1-2.

Round 4 was against an Uterra/Tempys deck that didn’t much of anything.